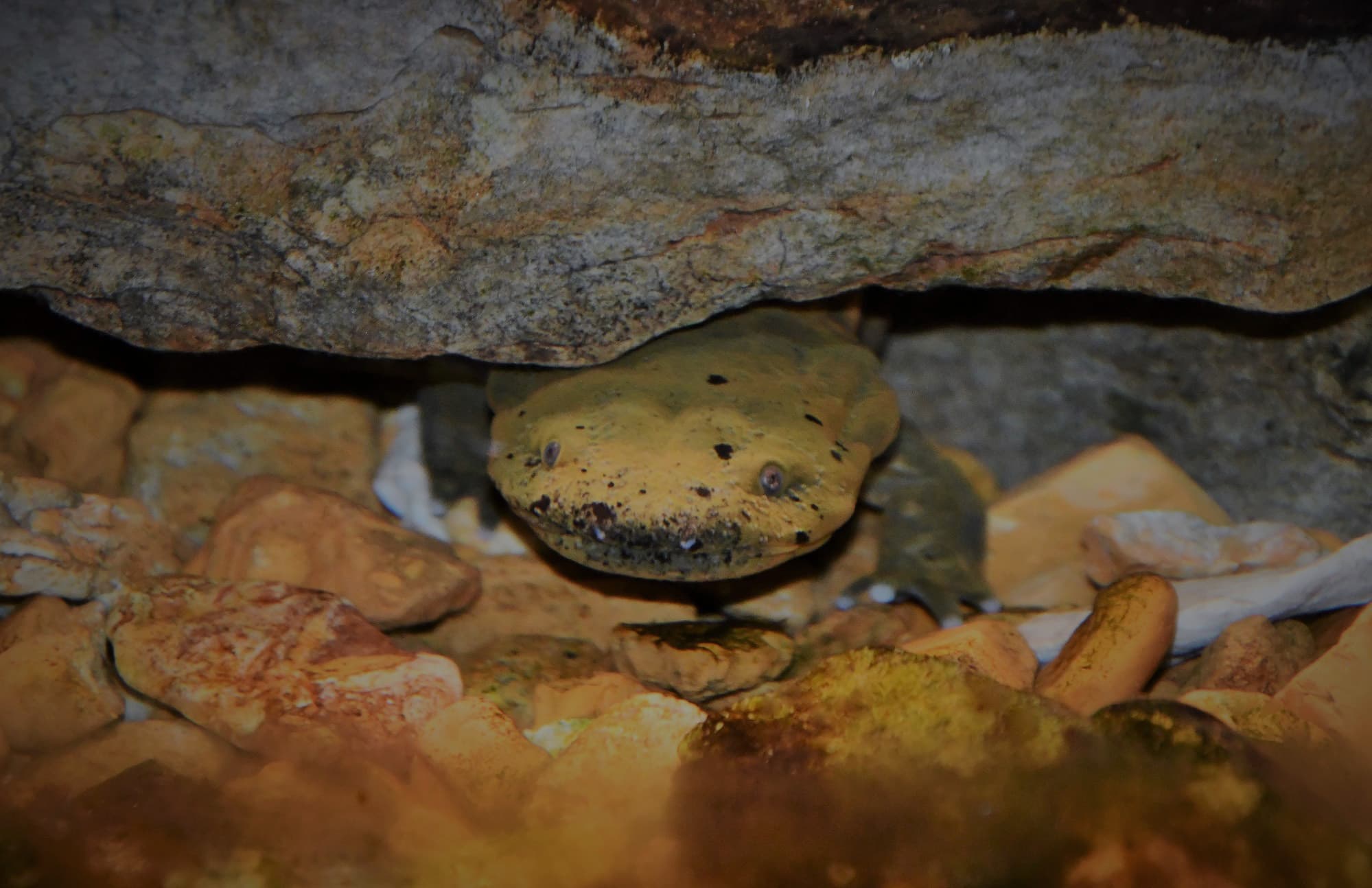 A Missouri resident, the hellbender is the largest species of salamander native to North America. These salamanders are perfectly adapted to their stream habitats with their flattened head and body; short stout legs; long rudder-like tail; and very small, beady eyes. Hellbender populations are threatened by stream impoundments, pollution and siltation (when water becomes dirty from fine mineral particles in the water). Over the past 40 years, due to these and possibly other unknown factors, the populations in Missouri have experienced drastic 70% declines. 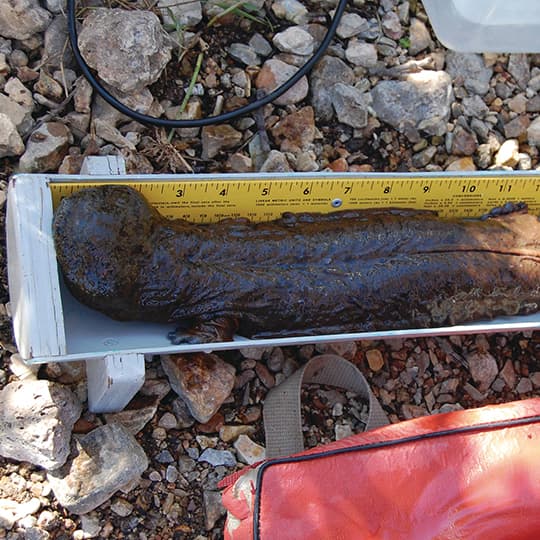 Located in our own backyard, the exotic hellbender has been an ongoing interest to the Saint Louis Zoo for the past 30 years. There are two subspecies of hellbender (Ozark and eastern hellbenders), and Missouri is the only state with both! Unfortunately, this native species is in need of immediate assistance. What institution better to help than the Zoo with its history of successful breeding of amphibians and involvement in local, as well as international, conservation? The Center's establishment of a successful breeding program for hellbenders will help ensure the future for this unique amphibian. The place to save the hellbender, like any other form of wildlife, is in its native habitat. 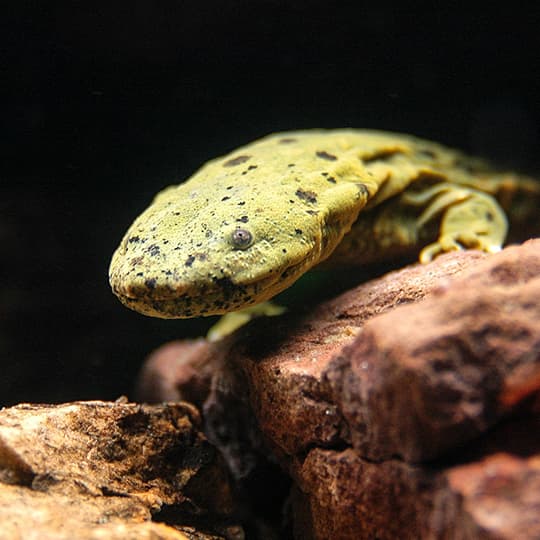 Behind the scenes at the Zoo's Herpetarium is a fully-functioning, 32-foot-long, man-made Missouri stream for breeding hellbenders, complete with a rock bed, the occasional afternoon rain shower, and the freshest and purest water in the area. Here the Zoo has formed breeding groups of adult hellbenders and is head-starting the young hellbenders for their eventual release.

In 2011, the Saint Louis Zoo and the Missouri Department of Conservation announced that Ozark hellbenders had been bred in human care - a world's first for either of the two subspecies of hellbender (Ozark and eastern hellbenders). The decade-long collaboration yielded 165 baby hellbenders.

In November 2012, the Center announced that eight female Ozark hellbenders had laid a total of 2,809 fertile eggs in the Zoo’s artificial nest boxes in simulated streams. By late November, the Center had more than 1,000 larvae. For the first time, all three of the Zoo’s distinct river populations had reproduced.

In 2018, the Zoo’s first generation of hellbenders successfully bred, and 39 larvae hatched.

In 2022, the 10,000th hellbender was released into an Ozark river by the Missouri Department of Conservation and the Saint Louis Zoo.

The Zoo constructed a climate-controlled habitat capable of sustaining breeding groups of hellbenders in the Zoo's Herpetarium. Working with our partners, the Center concentrates not only on conservation breeding but also on assisting the Missouri Department of Conservation and U.S. Fish and Wildlife Service with research projects that deal with stream quality assessments and hellbender health evaluations.

The Saint Louis Zoo received Significant Achievement in the Association of Zoos and Aquariums’ (AZA) 2016 North American Conservation Award for its Ozark Hellbender Augmentation Program. This award recognizes exceptional efforts toward regional habitat preservation, species restoration and support of biodiversity in the wild.

Outstanding Collaborator of the Year Award

The Saint Louis Zoo's Ron Goellner Center for Hellbender Conservation received the Missouri Department of Conservation (MDC) Outstanding Collaborator of the Year Award in May 2010. The award recognizes the Zoo's Herpetarium staff, as well as its veterinary and life support departments, for being key players in conservation efforts for hellbenders in Missouri and nationally, particularly in regards to zoo propagation efforts.

The Zoo was commended for being devoted not only to hellbender conservation, but also to working with MDC and other partners. "The Zoo has always been a strong supporter of amphibian and reptile conservation in Missouri and has graciously assisted MDC with many surveys, questions and issues that have arisen over the years," stated Dr. Jeff Briggler, herpetologist with the MDC Resource Division. "This dedication to amphibian and reptile conservation in Missouri has been the result of over 40 years of collaboration between the Zoo and MDC herpetologists."

A special award was also presented to Karen Goellner, wife of the late Ron Goellner, for continuing to raise funds and create awareness for hellbender conservation.